Is Philanthropy from the Wealthy Sufficient, or Would a Little More Government Help?

My question for today is whether philanthropy coming from the rapidly increasing wealth of the most wealthy is going to the most critical problems of the underprivileged, and whether the magnitude of it is sufficient to make a difference.  Can increased philanthropy, a by product of increased inequality, be considered a good alternative to programs from the state?

In other words, is increasing inequality, when coupled with the increased philanthropy from some of the ultra-rich, going to make up for what has been cut as the neoliberal economic policies have been increasingly at work across the last 30 years to try to starve the government?

The policies successfully pursued by the Conservative Right since Reagan, have resulted in reducing government expenditures on a variety of critical programs–education, infrastructure, and social welfare are some of those. While medicare and social security have survived, many other social programs benefitting the poor have been reduced.  While this has been happening, our nation has experienced increaseing inequality. Income and wealth have grown dramatically for the wealthy, and wages have been stagnant for the middle class and the poor.  Meanwhile, in some quarters, among the ultra-wealthy, there seems to be a great deal of pride taken in their philanthropy.

This post is not intended to find fault with the generous philanthropy of some of our rich. I am not suggesting they gained their wealth illegally or immorally.  The minority who did that is another subject altogether.

Philanthropy of most all sorts is certainly beneficial–beneficial to someone, be it Stanford University (which recently raised a record $1 billion), the Catholic Church, California Pacific Medical Center (or your favorite hospital), and many others. There seems to be a sense of complacency, however, regarding what is happening comprehensively as the set of neoliberal policies have been playing out across the last 30-40 years.

My guess in preparing to examine this is that (a) little has been done to effectively analyze the question; and (b) there is a growing gap in the difference between public (government) support for the poor and what is directed to the poor from philanthropy.  My guess is that most philanthropy goes to entities like those mentioned in the previous paragraph, and not to the needs of underprivileged–unless one tries to determine how much a church, a major university, or a hospital ends up benefitting the poor.

One source is research sponsored by Google, focused on formal philanthropy, so not including measurement of gifts between individuals. Thanks to Rob Reich of Stanford’s Philanthropic Center for directing me to this limited research.

First, the estimate is that total philanthropy has been averaging about 2 percent of GDP since the mid 1990s. Of the 2 percent, Google finds that approximately 1/3 or about .7% of GDP goes to needs associated with the poor. They find that only about 8% of the 2%, or about .2% of GDP is channeled by philanthropy to the basic needs of the poor–food, clothing, housing, etc., and the remainder for things such as literacy and job training. 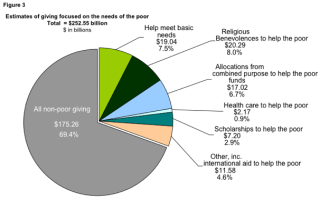 Perhaps the lack of attention to the question is already answered by simply seeing the magnitude of philanthropy.  By comparison, the 2013 US federal budget proposed 20 percent for social security, 19 percent for defense, 16 percent for unemployment, welfare and other mandatory spending, and 21 percent for medicare, medicaid and related programs. So, by comparison to any of these, regardless of whether they have been cut, 2 percent of GDP or 8 percent of the national budget pales by comparison, not to mention 1/3 of this amount, the portion going to the poor.

So, it appears that philanthropy cannot possibly make up for any significant changes in social support programs.

But a few questions remain, just to close the subject: 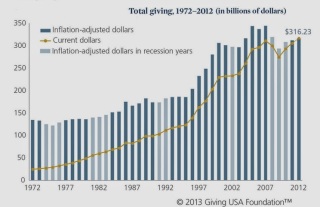 The answer appears to be yes, indeed, a nice increase of 100% or so since 1972! But, hold on, GDP in 1972 was 1/3 of what it is today, also in inflation-adjusted dollars–so, the growth in philanthropy has not kept pace with GDP growth.

Given that wealth to the top 10 percent has grown faster than GDP across these years, this suggests that the ultra-wealthy have not increased their giving in concert with the growth in their wealth. Take a look at the comparison done by Piketty and Saez, two of the foremost scholars on the subject of inequality.  For 30 years between 1950 and 1980, the incomes of the lower classes (the 0-90 percent group in the left most column) advanced nicely, even more than the percentage increases among some of the wealthiest. Note that the wealthy did not suffer, however, they just yielded a little equality to those of lower incomes.  However, for the 28 years since, the trend is reversed. The incomes of the 0-90 percent increased only 1 percent, while those in the top 1 percent increased their incomes between 81 percent and 403 percent.

Source: Piketty and Saez in http://www.wweek.com/portland/article-17350-9_things_the_rich_dont_want_you_to_know_about_taxes.html

I acknowledge that this comparison needs more work than I have put into it. These numbers are far too aggregated, and the analysis would benefit from more segmented data and comparison. For example, it would be ideal to have the philanthropy of the top 10 percent, 5 percent and 1 percent, to be able to compare that to the advances in incomes displayed above. I also want to point out that the Google analysis appears to focus only on what is going out from donors–thus not including what may be coming into large wealthy endowed foundations for distribution in future years. To be complete, this kind of analysis needs to consider that, as well.

Nevertheless, it seems that the basic question is answered: The amount of annual giving philanthropy in the US has not increased in parallel to the increase in wealth to the ultra-rich, and the amount of philanthropy, particularly considering the small proportion of it targeted to the underprivileged, cannot possibly fill any meaningful gap in shortage of support to the underprivileged in the US.

My conclusion: Much to the disappointment of neoliberals, here is another example where the private market, left uncontrolled, will fail the needs of the state–unless, of course, you hold the view that we need not spend anything much to help the underprivileged. I argue some engagement from the state is necessary.

Note that the Scandinavian democratic socialist countries such as Sweden have managed rather well in terms of prosperity, growth, and happiness of their citizens for a considerable period of time. England has a national health system, and the costs of that system are below our private insurance market based system, and it works as well or better than our system in many ways.

I’m not promoting socialism for the US, just noting that our fears of government are not justified by comparison to other countries.

However, we must press forward on all fronts and be practical. Until/unless some improved government solutions can be effected, we must work with the wealthy to continue to grow their contributions and help them to meet both their personal charitable preferences and also collaborate with government and other philanthropists to better address the needs of the underprivileged. According to Thomas Piketty and many others, we appear to be in a long term trend toward increasing wealth at the top.