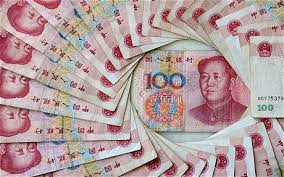 Stock markets have been roiling this week, primarily over unfounded concerns with China’s economy.

There is a connection between an economy and its stock markets, but the markets are separated from the economy by the speculative elements of the markets. Speculation seeks to anticipate both the future performance of economies and that of their publicly traded companies, and also seeks to forecast investor sentiment. Investor sentiment includes attitudes toward whether stocks are under or overpriced, and many other elements. Chinese stocks were highly overpriced and deserving of a correction, which is happening. Once a segment of the market flees over unfounded sentiment, less well educated investors tend to follow the lead, assuming someone knows something I don’t. Often, that’s not the case. This time around, it is not, at least not as it relates to fears that what’s happening in China signals anything close to doom.

China is on firm footing, no need to be concerned, in my opinion. I know something about China because I studied it seriously for a year in a graduate program in London recently. I have also lived there for a time and I have travelled there many times and managed a business there.

I am pleased to see this morning’s NYT article by the noted China scholar Nicholas Lardy (“False Alarm on a Crisis in China”). He summarizes the real condition of China today–in good shape and prospering.  No reason for pundits and market watchers to be afraid China is about to implode.

There have been plenty of China critics for all of the 40 years now that China has been steadily growing its economy and bringing its citizens out of poverty. Among them are Gordon Chang (author of The Coming Collapse of China). To date, they have all been wrong. My own guess is that Gordon will probably never have the chance to say, “I told you so.”

Just this morning, as all the newscasters are trying to explain, one BBC commentator said, “…whenever you see that kind of growth, there has to be a crash…” This is shoddy journalism. It’s simply not true. There is another alternative to the aftermath of stellar growth. Less stellar growth. China grew at close to 10% annually for about 30 years, and is now rather steadily producing 7% growth. A slowing in economic growth is inevitable as the base gets larger. Everyone should know that.

And as China continues to grow, 7% will eventually be unsustainable. 6% will be healthy, and so on. If Chinese authorities were trying to sustain 10% growth now, we should be concerned. That would be dangerous in terms of the amount of investment required to accomplish that, and might risk a future crash. But they are not. We should be delighted that they are moderating their growth targets. Such newscasting as this simply fuels fears of poorly educated investors and adds to the length of the turmoil.

On Fox News yesterday, Gordon Chang (who has a book and a vested interest in being right in his view that China is crumbling) says Chinese authorities are at the “corner of panic and desperation.” He thinks the 7% is really 2% and will be negative soon.”

I’d rather trust the view of the IMF than that of Gordon Chang: 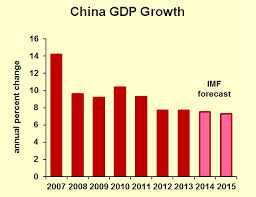 Chang says China has ahead two decades of recession or a crash, and he forecasts the latter. This is rubbish and Fox should be ashamed to continuously call on him–especially at a time like this when uneducated investors need solid facts, not incendiary speculation.

At the very least, they should balance that view against someone who is a highly respected China scholar, like Nicholas Lardy: “…recent events should be seen as part of the conscious liberalization and rebalancing of the Chinese economy. Even if that means a sell-off in stocks, it is not a sell-off in the fundamentals of the Chinese economy. In fact, this may strengthen those fundamentals by going further down the path to reform.”

There is a lot more which can be discussed about China–other concerns and fears which are rampant in American politics (e.g., Donald Trump), but those shall be the subject of another post.