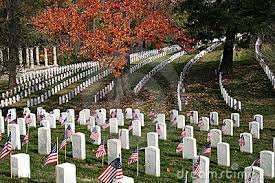 Lest anyone be unsure, I am a great admirer of Barack Obama. One of my strongest (but by no means only) reasons for admiring and respecting him, is that he has done his best to keep us out of war, not any easy task, given the hawkish Republicans he must contend with.

If you listened today to our President’s public statements about the war in Syria, it seems to me impossible to disagree with his thoughtful and thorough explanation of the issues, the complications, and our best approach to the ultimate resolution of the conflict there. Yet, most certainly, many Republicans will disagree.

We’ve lost American lives in Vietnam, in Iraq, in Afghanistan, and elsewhere, and now we have an opportunity to lose more American lives in Syria. Hawkish Conservatives like John McCain and Lindsay Graham want a much more aggressive military engagement in Syria, using the recent advances by Russia as a lever to incite Americans. Graham is perhaps at the extreme, willing to use US troops on the ground there. Others like McCain want something more aggressive, but are unwilling or unable to specify just what that is. Perhaps they are constrained by awareness that the American people remain war weary and unwilling to provide support for deeper military engagement abroad.

Conservative Hawks place the blame for the Middle East war on President Obama. He’s responsible, they say, because he withdraws American troops too soon. Never mentioned is that George Bush took us into Iraq in the beginning, spending Billions and costing us thousands of American lives. Never mind that there were no weapons of mass destruction. Had we not rushed in, maybe we would have learned without taking the wrong action.

Never mentioned is the reality that there are local ethnic and religious differences that are the essence of the Middle East conflicts. Also, there are frustrations resulting from borders drawn by colonial powers, and there are bodies of cultural likes who want their own nations.

Conservatives do not ask, “what do we know about the unique issues in foreign lands, and what right do we have to interfere?”

Conservatives need to be reminded that we have spent Trillions of dollars in foreign wars: 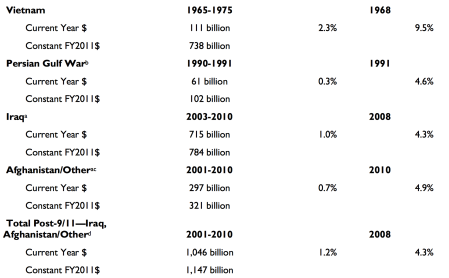 Conservatives do not want to be reminded how many American lives have been lost in foreign wars: 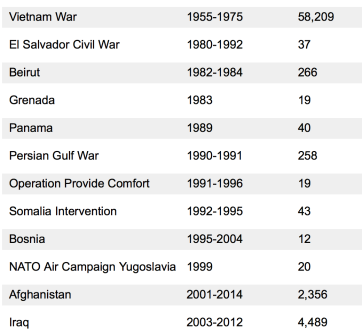 And yet, I do not know of any of those Conservatives who think we won any of those wars, or even that the outcome was even modestly positive. It’s always easy to say that’s only because someone on the Left in Leadership later didn’t follow up correctly.

Conservatives do not want to acknowledge the casualties of innocent locals when we intervene. Even our best attempts to conduct war carefully can fail with disastrous consequences. (Fast forward to October 3 and we learn that a mistaken US airstrike may have killed 19 people at a Doctors Without Borders hospital in Kabul). There are international conventions for war, to which the US subscribes, and rightfully so. These deny the indiscriminate use of weapons. Thus, some hawks fail to accept that moral considerations do not permit fast and total destruction as a means to solve the conflict. Slow and careful combat in foreign lands goes on forever and locals always have the advantage. How many such wars must we wage to see that we simply cannot win foreign wars? If we had any history of success in winning foreign wars (since WWII), I might be moved to consider our engagement. But we don’t. For the most part, we simply make things worse–for the locals and also for ourselves.

And even if we have some success, it is limited, and we have no ability to assure that the replacement government will be better, will be good, and will sustain. We have failed there as well.

On top of all this, it is indisputably true that our interference, our killings in foreign fields, our arrogance to assert that only we know what is best for the people in Kabul, in Kobane, in Falluja, has resulted in increased anger, vengeance, and terrorism in the US.

It’s not that we should turn a blind eye to massive human rights violations. President Obama is not doing that, does not recommend that. We are in constant discussions with our vast set of allies. We involve world governance organizations. We provide air strikes on ISIS. We support the moderate opposition parties. We provide humanitarian assistance. We continue sanctions against Russia due to their actions in the Ukraine.

Engagement in foreign wars must be a last resort. We must negotiate, and we must galvanize global support. We must use all measures before we engage militarily. And I believe deeply that our President’s consistent attempts to show respect to foreign leaders, even those with whom he disagrees so strongly, is far more effective in the long run than the belligerent rhetoric coming from the right. Obama “invites” President Putin to join in effective destruction of ISIS, and presents a hope to see Russia return to greatness and share in world leadership.

All the above considerations must be carefully considered before we choose to engage in foreign wars or intervene to protect human rights. The reality is that our intervention usually costs far more in dollars, lives (US and foreign), and the result is usually a failure to resolve, followed by protracted conflict and increased terrorism. War has profound and lasting implications.

What our President rightfully said today, is that the Syrian war will never be won by foreign powers. Resolution will require the concerted action of local peoples who hold the grievances leading to the war. Organized support from global powers can help, but cannot win the war. Russia’s actions may seem bold to the uneducated, but Russia only has Iran and Syria as allies, while most of the rest of the Western world are our allies. Russia’s economy is experiencing a -4% GDP decline, while ours if the strongest in the world. Russia is headed toward alienating the Sunni Muslims of the world, while Russia  itself has a large Muslim population. Not very smart.

Let’s wait. Russia also has a list of failed foreign wars. This is going to be another of them if they continue.

If the Conservatives seek a bold way for the US to help more, some meaningful “action,” to “do something,” then let’s match Germany in willingness to take and resettle Syrian refugees. They’re taking 800,000. We are taking 100,000–not this year, but next year…and only maybe.

Taking the Syrian refugees would be a far lesser investment than waging war there, and over time, it would pay dividends. No lives would be lost, and many, many would be saved. What could be a better response than this?

2 thoughts on “Only Fools Rush In”