What interests and concerns me most today about San Francisco, the US, and indeed the whole world, is economic inequality.

What I write here today is mostly opinion. I believe I could back up most of it with confirmative research, but I’m not going to take the time and space in this posting. I have studied the issue deeply and am constantly reading and increasing my understanding. In my 2017 year in the Harvard Advanced Leadership Initiative, this is what I want to study further. I hope to find an avenue for influencing movement toward better equality and opportunity

Here in late 2016, approaching a critical election in the US, following a surprising vote in England (to leave the EU), there is confusion as to what are the causes of all the political anger that is resulting in these dramatic and troubling developments here and elsewhere. Some say it is caused by immigrants. Some terrorism and failed foreign affairs, or specific foreign countries–e.g., North Korea, Iran, Russia, China. Some say it is ISIS. Some say it is the Democrats and President Obama, who has been in office for  8 years.

I believe the root cause of much of the frustration is economic inequality. Yes, it wouldn’t be such a concern if there had been “trickle down,” where the rich get very rich, but everyone else gets steady improvement. But, in most developed countries, the second half has not happened. We’ve been stalled since 1980 when neoliberal economics started a steady global advance. Now a number of countries are experiencing record inequality, and in the US we’re back to the Robber Baron era around 1920.

Here is what I think would be better if we had economic inequality back to the level of the 1960’s when we saw a highly egalitarian country following the GI Bill and social programs launched following WWII:

If we had better equality and opportunity, we would have better jobs available, better opportunity, and gradually increasing real wages. I think this is the root of the problem. People are angry primarily because they don’t see how they can advance, or in many cases how they can provide for their families. They’re vulnerable to blaming targets politicians rail against.

Foreign countries as the source of our problems: This goes to what really is our problem? I think it’s primarily lack of good jobs, lack of opportunity, stagnant wages. Blaming the economic stagnation of our middle and lower class on other nations is nothing other than a convenient “nationalistic” political agenda to make the crowd angry. It wouldn’t be necessary to cause all the trouble with other countries if we didn’t have our own problems to blame on them. China has been a net benefit to the US–huge.

Foreign trade and globalization: Same. The US provides far less to help displaced workers than do other countries. We brought much of the frustration on ourselves as we led the race to globalization without any plan to help the displaced. If foreign trade ended now, the people who would suffer most are the middle class and poor, because they buy more of the cheaper foreign goods than do the rich.

Migration: If we had a somewhat more equal world, good income and opportunity in Somalia, Syria, Afghanistan and Iraq, people there would not be wanting to leave their homelands.

War: If we had more equality in the US and the developed world, I believe the vitriol which feeds the recruitment for ISIS, would lose a great deal of its appeal. War is often fed by jealously and anger over how certain people live in luxury while others can’t even feed their families.

Terrorism: Same. We wouldn’t need the wall or the massive border protection and TSA.

So, a lot of the anger people feel is directed to the wrong targets, as politicians try to stoke anger and make promises of “fixes.” But the real problem is jobs, wages, and opportunity for the middle and lower classes–here, in England, and in China and elsewhere.

It’s understandable to blame the current administration. Of course, it’s convenient to blame David Cameron for failing to sufficiently protect England vs. demands of the EU, and it’s convenient to blame President Obama for anything at all that is wrong in the US.But the administration of our country has three constitutional elements: The President in the Executive Office, Congress, and the Supreme Court. A Republican party brought us the economic crisis which the Democrats inherited under Obama in 2008. Obama’s administration for the last term has had two houses controlled by Republicans determined not to do anything to fix the plight of the lower classes. And up till the death of Justice Scalia, the Supreme Court was also weighted to the Right.

If the American people could understand these issues and vote in today’s Democratic ticket, control both houses, and the next few Supreme Court seats, I believe we might see some improvement, thanks in part to Bernie Sanders influence on the agenda. He’s wrong about foreign trade  which is largely good for us, but  he’s right about education and inequality. 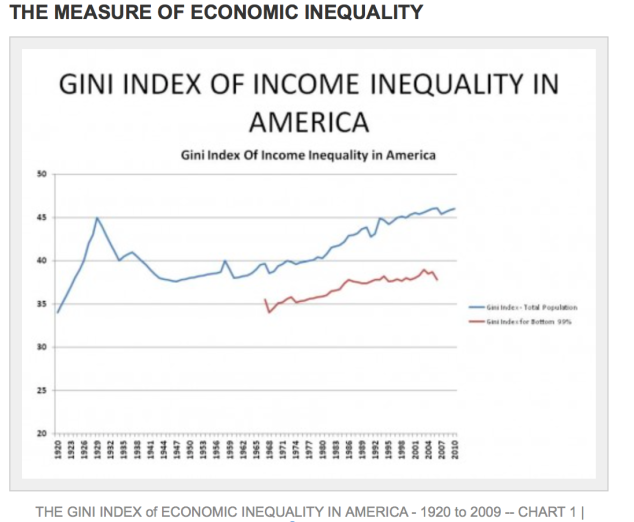 By the way, this writer is not recommending equality, everyone the same, just a better balance. Something like the 60s. My parents were poor, but they found opportunity and they advanced. During that time the rich got richer, but everyone else saw steady improvement also. Today all the incremental wealth and income is going to the rich.