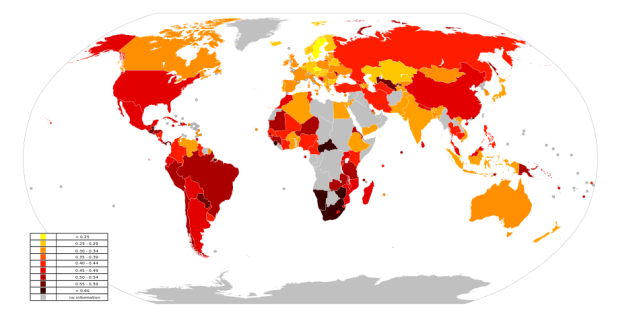 Finally, we are starting (perhaps) to force into Western consciousness the sheer reality that inequality is a huge problem–in the US and in many countries. Maybe.

The World Economic Forum has listed economic inequality as the number one global risk for 2017. That puts it ahead of climate, environment, cyber attacks, terrorism, failure of states, and other major global and national concerns.

This have been clearly developing for decades, but to date there has been a profound reluctance on the part of politicians (on the Left and on the Right) to recognize inequality as a major issue. Academicians, political analysts, and economists (such as Stiglitz, Krugman, and Reich)  have tried to to explain the political tendency to suppress it and have attempted to push it to public focus, to little avail.

Politicians have chosen to substitute “opportunity” or “shared prosperity.” “Poverty” is always a safe political focus. But, “inequality” may be understood as a need for “equality,” and of course not even our farthest Left citizens really want that–we just want a more moderate level of inequality, such as the US had in the 60s (Gini index of.38, vs. .46 now). The word “inequality” seems to suggest I have more than I deserve, that I should give some of mine to make things more equal. On the other hand, “poverty,” well that’s optional–it’s not my fault, and I can choose to contribute, but I’m not obligated to. Perhaps the implied obligation is one element of resistance to “inequality.” And, of course, there is a widespread ethos of individuality in the West, especially the US, which says we each make it or fail, based on our own strengths and weaknesses. We don’t need anyone’s help, least of all the government. Thus, a reluctance to suggest any form of redistribution as acceptable–that would mean my hard work would yield only limited rewards, which would in part by taken by the state to create more equality.  Given this, no surprise the US is the most unequal of developed countries.

But no matter what you call it or how you measure it, this has become a highly unequal world across the last 40 years. Consider this recent finding by Harvard scholars regarding mobility in the US: “…we find that rates of absolute upward income mobility in the United States have fallen sharply since 1940. Under the benchmark of copula stability, the fraction of children earning more than their parents fell from 92% in the 1940 birth cohort to 50% in the 1984 birth cohort. Rates of absolute mobility fell the most for children with parents in the middle class.” I’m fortunate to have been in that earlier cohort, and made a great deal more money than my parents, but the same opportunity does not exist now for my children and most children, except for those of the wealthy.

The WEF Global Risks Repot 2017 states: “This year’s findings are testament to the key challenges that the world now faces. The first two are in the economic category, in line with the fact that rising income and wealth disparity is rated by GRPS respondents as the most important trend in determining global developments over the next 10 years. This points to the need for reviving economic growth, but the growing mood of anti-establishment populism suggests we may have passed the stage where this alone would remedy fractures in society: reforming market capitalism must also be added to the agenda.”

Note the modest increase in growth in most recent recovery, less than 10% in 20 quarters, while the 1975 recovery exceeded 20%. That’s not the failure of the Obama administration. The present recovery reflects structural constraints we didn’t have in 1975. Certainly Congress and the President can enact policies to increase growth, but failure to recognize the structural limitations of that growth is not only wrong, but it’s going to expose the new administration to failure to deliver, when in fact, there are other policy priorities which could yield better progress toward “making America great again.”

Yes,we have passed that stage, but the likes of Donal Trump and many others on both sides do not yet recognize that. They continue to put all focus on reviving economic growth and using hard line trade negotiations and protective measures as the solution to jobs and wages. This stubborn insistence to turn back the clock to the age of US dominance in global manufacturing is doomed to failure. The major influence of resistance is technology. Then, there is globalization. Finally, if we should actually institute such tough protectionist measures as to succeed in bringing back manufacturing, we would incur two harsh punishments: (1) as a result of foreign equivalency responses in trade, we would dramatically slow the growth of US exporters and thus the US economy as a whole; and (2) we would dramatically raise the price of products which are presently imported from low wage countries. These responses would result in an uprising which would make the 2016 US populist movement seem tame by comparison.

It’s going to take a comprehensive reform of market capitalism.

One thought on “Finally, maybe…”