The Impact of Technology on Inequality
October 8, 2014

There are many reasons to be concerned about inequality. For me, it’s enough to look at the steep rise in inequality across the last 30 years. The trend line is enough–let’s do something now to arrest it. My conservative friends argue it’s not bad enough yet, maybe it will get better. I feel we should consider structural elements which are playing out in the world economy, and use our common sense to consider what is likely to be the sad state of affairs if current trends continue. It takes time to reverse direction–years–and we should start now.One of the major structural elements is the technological revolution which we are experiencing.

This post considers the impact technology is having and is likely to have in worsening inequality.
It was 1930 when the brilliant economist John Maynard Keynes predicted that by now the workers of the world would be enjoying a 15 hour workweek due to the projected benefits of technology.  Technology indeed advanced sharply, but it hasn’t worked out the way Keynes envisioned. While some people just enjoy their work and want to do more of it, even some billionaires who could work 15 hours, or perhaps not at all, that doesn’t come close to explaining the situation for most of the middle class and below. They have to work, and now it often takes both husband and wife just to make ends meet.
The Economist, a conservative publication, usually favoring the benefits of unfettered capitalism, has a special report in the current edition, looking at the state of the world economy, and peering into the future. The Economist sums up the impact of technology as folows: “Technology has created a growing reservoir of less-skilled labour while simultaneously expanding the range of tasks that can be automated. Most workers are therefore being forced into competition both against each other and against machines. No wonder their share of the economic pie has got smaller, in developing economies as well as in the rich world.”  To put it another way, Keynes somehow missed the reality that the benefits of technology are being captured by the capitalists who create and own the technology. The benefits are not being shared widely with the middle class and below.
Of course, the rest of us do enjoy some of the benefits of technological advance. Even in the poorest countries of Africa, the cellphone has improved life for many. I like my all electric car, and buying through Amazon saves me a lot of time. There are many other benefits.
Yet, there remain 1 billion people in this world who live on less than $1.25 per day, including 400 million children. And the share of wages enjoyed by labor has only declined since 1980:

The Economist reports that real wages increased only 1% in real terms between 1991 and 2012. National income increased at a faster rate, but an increasing share went to capital, to the wealthy.
Here’s the experience of the top 10% across the same period: 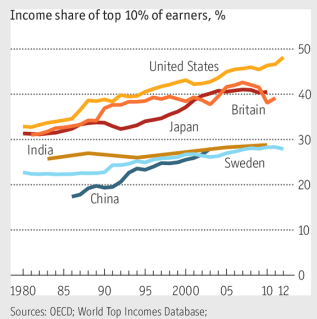 Their income soared!
The Economist’s article laments the lack of discernible impact of technology on overall productivity so far–thus resulting in a troubling concern that without a significant technology productivity boost to growth, we will have insufficient growth to pull more out of poverty. We know that growth is necessary to alleviate poverty, but is not necessarily sufficient, without some method of assuring fair distribution, or at least in assuring equal opportunity. Opportunity, measured by upward mobility, has declined in the US and is lower than that of many other countries.
Just consider what we have already seen: Our auto plants have been mechanized, enabling robots to do the work of thousands. Here in my city, the few hundred toll takers for the Golden Gate Bridge have been eliminated. Toll taking is now fully automated.  I remember enjoying the wonderful old hands who operated elevators at the AIG headquarters in New York in the 90s, but I imagine they’re gone now. Many warehouses are now managed by a system of conveyors and automated product pickers. Many larger grocers offer a self service checkout process. Bar codes have eliminated the need for people to take inventory. Most clients of banks seldom need a teller anymore–ATMs handles a high percentage of transactions. I have a small mail weighing machine on my desk, stamps I can buy online, and I can post any package from my home, making the post office irrelevant for me, except for delivery. Actually, most of what used to be mail now comes to me instantaneously via e mail.
Looking ahead, there is the intention via Amazon to dispense with many of the UPS and FedEx drivers who now deliver something to me several times weekly, already making millions of retail clerks redundant. Amazon promises to deliver via drone. Google has a number of experimental self driving vehicles on the roads around the Bay Area of California. While I imagine some will enjoy continuing to drive, many in my generation will be happy to read and watch the news, confident our safety is better assured than when we were at the wheel–and no need for a driver when we are too old to drive. What’s going to happen to the millions of drivers of taxis? Some have estimated that a significant portion of legal and accounting work can be automated.  What’s going to happen to my accountant when I am actually once again able to file my own return, currently dozens of pages, something I haven’t done since my youth when I only needed the short form 1040. Carl Frey and Michael Osborne have conducted a study which estimates that 47% of US employment is at risk to automation.
Usually comfortable to let the private market solve its problems, even The Economist ends its article with recognition that government must do something: “Most rich economies have made a poor job of finding lucrative jobs for workers displaced by technology, and the resulting glut of cheap, underemployed labour has given firms little incentive to make productivity-boosting investments. Until governments solve that problem, the productivity effects of this technological revolution will remain disappointing. The impact on workers, by contrast, is already blindingly clear.”

It is not certain that these trends will continue. Such is the unpredictable nature of economics. However, isn’t the reality of what we have seen so far in the current technological revolution enough? Aren’t the announced next developments enough? Can’t we see that it is at least highly likely that things will get worse? Technology is bringing benefits, but the profits of technology are going largely to the capitalists. Conservatives can argue that this is their rightful property.  But the picture of the future with the continuance of these trends is not one in which even the rich will want to live. 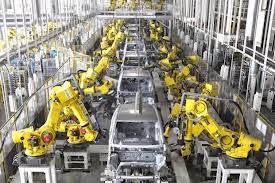 Carl Benedict Frey and Michael A Osborn, “The Future of Employment: How Susceptible are Jobs to Computerization?”, Sept 17, 2013, http://www.oxfordmartin.ox.ac.uk/downloads/academic/The_Future_of_Employment.pdf